January 1st, 2017: Turbines reached commercial operation date under our power purchase agreement.​
November 22nd, 2016: As of November 21st both turbines are energized and we are aiming to complete electrical and commissioning works by the end of the month.​
November 2nd, 2016: We are pleased to report Turbine 1 at Amherst is now energized! This is a great milestone as it is the largest wind turbine in the Maritimes.​
October 24th, 2016: The first turbine is assembled and raised, construction in ongoing on the second turbine. The bottom section of the second tower has been installed and we expect the rest of the turbines to be installed this week!​ 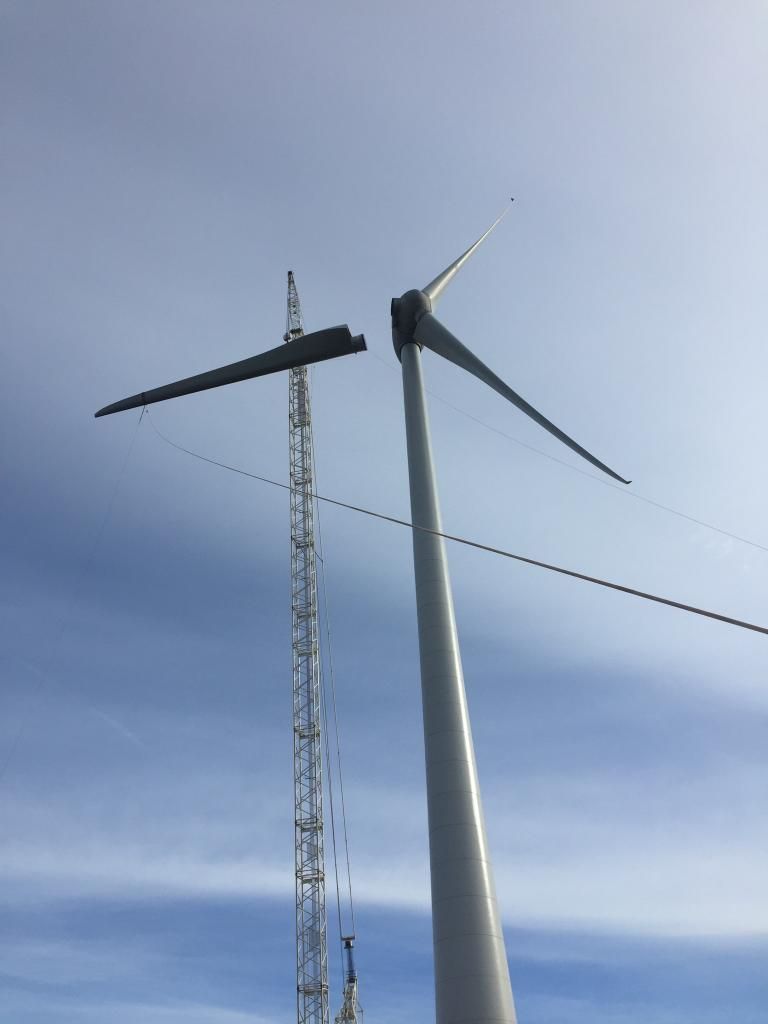 August 23rd, 2016: Construction has been ongoing. Last week, tower construction was in full force for Turbine 1 and the blades for that turbine began arriving Friday.​
July 19th, 2016: After an enormous day on July 9th, where 1,000 cubic meters of concrete were poured in seven hours, the foundation for Turbine 1 is complete. Prep work for the foundation for Turbine 2 is underway and trucks are beginning to deliver tower segments for Turbine 1. In the following weeks, more trucks like those seen the photo directly below are expected to arrive on site. ​
June 29th, 2016: Site road construction is almost complete and tower foundations will be poured within the first two weeks of July. Increased traffic near the site should be expected for that time.​
May 25th, 2016:  ​Road construction is underway and is continuing with success.​
May 6th, 2016:  ​Clearing of the site has been completed and equipment is on site to start building the turbine roads. Road construction is intended to start in the following week.​

Natural Forces is committed to establishing positive relationships with the community by means of public meetings and community consultation.  In doing so, we will address all concerns pertaining to this proposed development raised by local residents and community members. The following is an estimated projected time line for the public consultation that will take place in accordance with the following schedule:​
Winter 2011 - Open house #1
Summer 2012 - Community Feed-In Tariff Approval
Spring 2014 - Commenced wind monitoring
Summer 2014 - Open house #2
Summer 2014 - Website built
Fall 2014 - Environmental Assessment registration
Winter 2015 - Environmental Assessment approval
December 2015 - Newsletter Released
Winter 2016 - Pre-construction activities
Winter 2016 - Tree clearing
Spring 2016 - Road construction
Spring 2016 - Turbine pad construction
Spring 2016 - Foundation construction start
Spring 2016 -Tower, turbine and blade delivery
Summer 2016 - Concrete pour for foundation
Summer 2016 - Electrical work by Nova Scotia Power Inc.
Summer 2016 - Assemble of turbine
Fall 2016 - Site cleanup
Fall 2016 - Electrical work continues
Fall 2016 - Commissioning of the turbines
Summer 2036 - Project decommissioning​
Throughout the length of the project’s development, construction, operational, and decommissioning phases, Natural Forces is committed to: At the public meeting October 9th 2014 held at the fire hall by Natural Forces, there was mention of a possible Community Liaison Committee (CLC) however due to a lack of interest the CLC will not be formed at this time. The formation of such a committee may be revisited in the future if enough community interest is available.​

An increase in demand for local goods and services during the feasibility and construction phases of development.​

What is the Process?

The Environmental Assessment (EA) for the Amherst Community Wind Farm has been approved by the Minister of Environment on February 17th 2015. The EA was registered on December 19th 2014 and was open for public comment until January 28th 2015. An EA is a tool that is used to predict and evaluate the environmental effects of the proposed Amherst Community Wind Farm to determine the acceptability of the project. In other words, it is used to determine the impact the project may have on the environment surrounding the project. The EA was conducted in accordance with the Nova Scotia Environmental Assessment Regulations.
The results of the EA can be seen below: As well as online at the Environmental Assessment Website: www.gov.ns.ca/nse/ea
Other studies
The final bird and bat studies conducted for the project can be seen below: The EA and all the studies included in the assessment are paid for by Natural Forces.

Additionally, as a condition of the Environmental Assessment approval a post-construction noise survey was completed and the results can be viewed below:
​2017 Post-Construction Noise Monitoring Report​​

The first year of post-construction bird and bat monitoring has been completed for the Amherst Community Wind Farm. The results of these studies are still being compiled, when compiled, the final report will be posted here.​

Power generation from clean energy sources has become increasingly important. To reflect these needs, the Canadian government's targets seek to increase Canada's electricity generated by renewable sources to 25% by 2015, and by 40% by 2020. The benefits of wind energy in Canada are extensive:​For more information on wind energy in Canada, visit: www.canwea.ca.​
Some people have concerns about the impact of wind farms on house prices, health , and other issues. As a result, many studies have been done with regard to these issues and are available on Government and Industry association websites. To help people find good quality information, the Canadian Wind Energy Association (CanWEA) lists Windy myths about Wind Power. Many more facts about Wind Energy can also be found on the CanWEA Wind Facts page (FAQ's).​
How strong does the wind have to blow?
​Wind turbines start operating at wind speeds of 4 to 5 meters per second (around 10 miles per hour) and reach maximum power output at around 15 meters per seond (around 33 miles per hour). In gale force winds (25 meters per second, 50+ miles per hour) wind turbines shut down to reduce unnecessary wear and tear. For more information on wind energy, see the CanWEA factsheets on wind energy.​
Do turbines affect birds and wildlife?
​The greatest impact to wildlife is climate change, and wind energy is an important contribution to combating it. During the development of a wind farm, an Avian Impact Assessment Report is created, and submitted within the project's Environmental Assessment. The report typically contains detail on the avian monitoring methodology used, the associated data recorded, and the conclusions drawn.​
Do wind turbines frighten livestock?
​Wind farms are popular with farmers because their land can continue to be used from growing crops, or for livestock grazing. Sheep, cows, and horses are not disturbed by wind turbines, and in fact they usually enjoy the shelter that turbine towers can provide from the wind and the sun. Likewise, working dogs are also unaffected by wind turbines.​
Are wind turbines noisy?
​Since wind turbines are large mechanical equipment, they can be expected to produce noise. However, as wind turbine technology has evolved, the sound emitted by wind turbines has decreased, In current designs the mechanical noise is almost obsolete, resulting in only the interaction of the air and the turbine parts producing noise. This noise decreases as the radial distance from the turbine increases. To relate this, the compressor of a refrigerator produces 40-45 dB of noise. According to the Government of Nova Scotia, a wind energy project would have a noise level of between 35-45 dB at 350 meters away (Check out the Energy Nova Scotia Wind Page for more information). Federal and provincial jurisdictions establish minimum distances from turbines to occupied dwellings to minimize this noise.​
Does turbine noise have any effect on health?
​A study done by Health Canada in 2014 investigated the health effects of wind turbine noise. This study found that wind turbine noise was not associated with self-reported slip, illness or stress levels. The summary of these results can be reviewed on the Health Canada Environmental and Workplace Health page.​

To get in touch with us